October was a busy month for the ICMS team. With our HQ still closed and our staff spread out across Melbourne thanks to COVID-19 restrictions, we united on the internet to stage virtual events for the first time in our fifty-year history.

In this inaugural ICMS Rewind blog post, we unpack two of our recent virtual meetings, both held with brand new clients obtained through interest in our state-of-the-art virtual event management process, ICMSconnect.

From extending the reach of the event and increasing delegate numbers to managing the hesitations of the organising committee, we get the inside scoop from our Senior Conference Coordinator, Siobhan Bahn and Conference Manager, Athina Goutzamanis.

Image: The Annual General Meeting was the first event we ran in collaboration with the Spring Valley Golf Club. Used with permission.

The Spring Valley Golf Club Annual General Meeting (AGM) was held on Wednesday the 28th of October via ICMSconnect. Five board members presented and the stage was also opened to members in attendance to make commentary.

The interactivity of the discussion forum and live Q&A, instantaneous results of the live voting and ability to quickly distinguish visuals between speakers, were all great functions that made for a seamless online event. The accurate recording of voting numbers through the polling function was also heavily utilised throughout the night, for the useful purposes of seconding and carrying motions across the meeting.

A virtual AGM was an entirely new concept for the Spring Valley Golf Club, with some initially feeling apprehensive about going digital.

However, in showcasing the great features of ICMSconnect and emphasising the extended reach and the life of the event, both the board and members quickly embraced the format and experience. They were very appreciative for the opportunity to gather to discuss and vote on important club matters during restrictions in Melbourne. Many people who may not have been inclined to attend a traditional in-person AGM found themselves highly engaged, with the event catering to almost 200 participants.

“It was challenging and exciting. An AGM is very different in nature to a conference or educational session. They can be contentious and ensuring everyone has an opportunity to voice their opinion is difficult, but organising this event gave us the opportunity to think about and utilise the ICMSconnect service in new ways” – Siobhan Bahn, ICMS Senior Conference Coordinator. 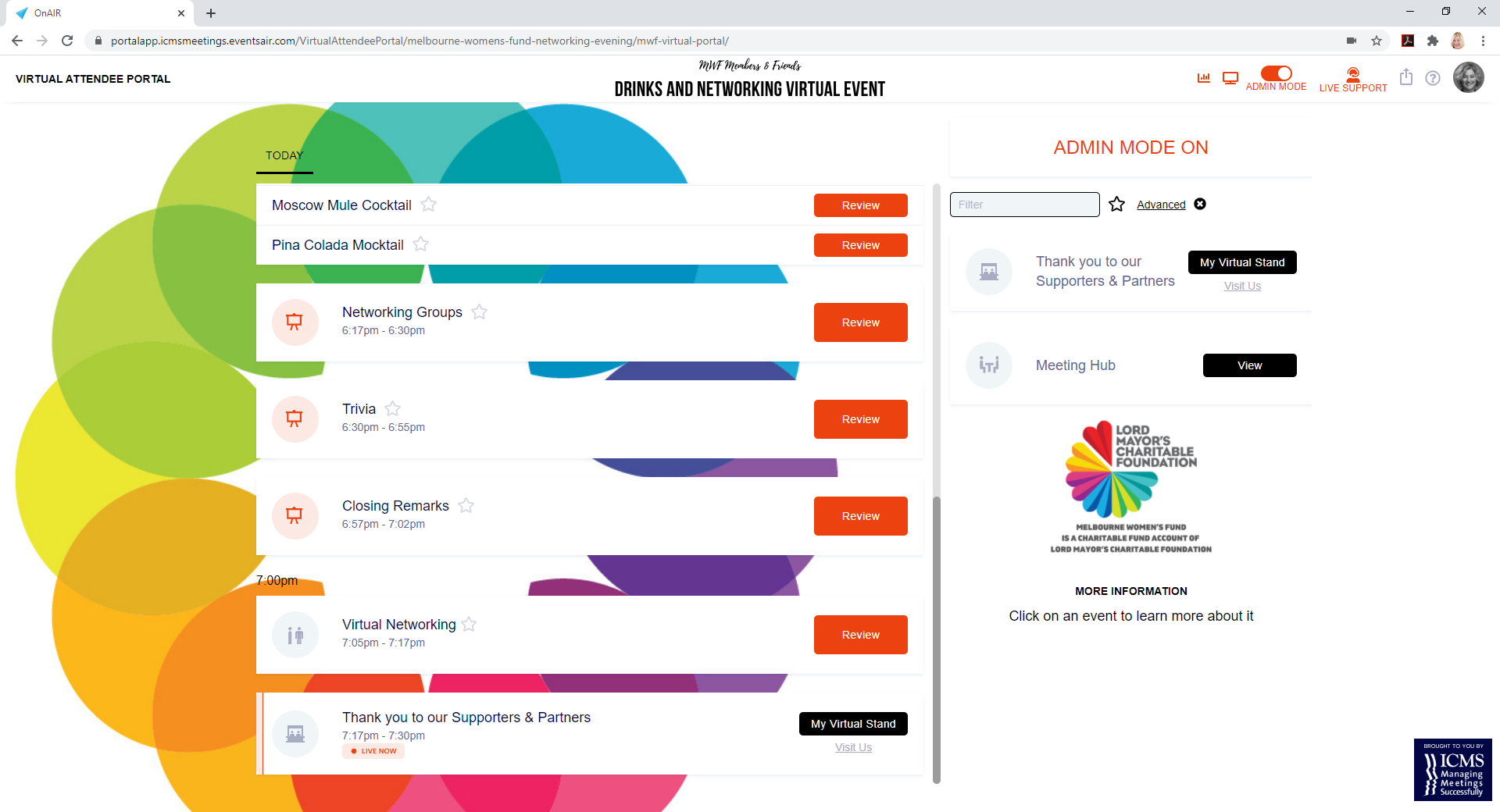 The Melbourne Women’s Fund (MWF) held its drinks and networking virtual event via ICMSconnect on Wednesday the 7th of October. The night kicked off with a welcome message from Australian TV and radio star Libbi Gorr, and was followed by cocktail and mocktail making lessons, networking sessions and trivia.

Over 50 members and guests worked their way between breakout rooms, which allowed for mingling and interactions with ease, as well as large group sessions moderated by our CEO Sarah Markey-Hamm, who utilised the platform’s host function.

Without traditional keynotes, panels and workshops, MWF’s networking event emphasises the innovative and fun features of ICMSconnect, which expertly translates social functions into the online arena.

Staging this event virtually enabled the MWF committee to meet and engage with its members as well as ensured attendees remained connected with the aims and values of the fund during the pandemic. Those who completed our post-event survey had overwhelmingly positive feedback to share, with the majority stating the virtual experience and content across the night was excellent. Over 70% also said they were very likely to attend another virtual MWF event in the future.

“It’s exciting to see everything that we have been preparing for and working so hard on all year finally come to life” –  Athina Goutzamanis, ICMS Conference Manager.